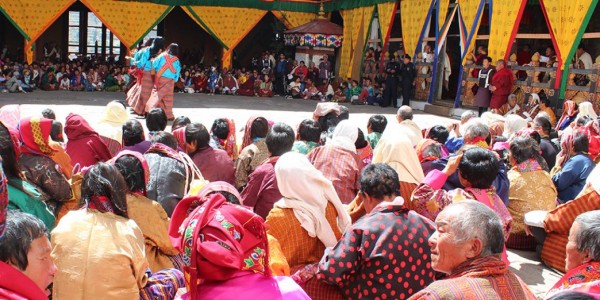 Bhutan is an exclusive and unique destination largely because of its ancient Buddhist heritage. It is in fact the last remaining example of a Himalayan Buddhist culture that once spanned both sides of the Himalayas. In Bhutan, this tradition continues to thrive as part of everyday life and one of the best ways to experience the essence of this ancient culture is by attending the Tshechu or religious festival that is observed all across the country on different dates.

Tshechus pay homage to Guru Padmasambhava, the Indian tantric master, who introduced Buddhism in Bhutan in the eighth century and most Tshechus including the Paro Tshechu keep alive a tradition that is several centuries old and provides an important connection to the past for a rapidly changing Bhutan.

If you would like to attend such a festival in spring 27th March – 31st March, 2018, when the weather is full of blue skies and plenty of sunshine, then the Paro festival tour package is the ideal choice.

The Paro Tshechu is Bhutan’s biggest attraction in spring and a major draw for tourists. It takes just before the agriculture season picks up steam, which means that in the past people in Paro valley had time to attend the important religious and social occasion as a family and a community. Paro has always been a blessed valley, beautiful and fertile and is the place where Guru Padmasambhava visited in the eighth century to meditate.

During the Tshechu sacred dances in colourful masks and costumes are performed to the accompaniment of religious instruments in the courtyard of the 17th century Paro Ringpung Dzong or the fortress of the “heap of jewels.” The venue itself is an imposing structure and full of history. The founding of the Paro Dzong goes way back to the 15th century offered the area in Hungrel to a descendent of Phajo Drugom Zhigpo who established the Drukpa Kagyu school of Buddhism in Bhutan. Initially a small temple stood there and later a five stories structure was built, which was known as the Hungrel Dzong. In the 17th century, the structure was offered to Zhabdrung Ngawang Namgyal who unified Bhutan. In 1644 Zhabdrung dismantled the old structure and laid the foundations of the new Dzong, which was consecrated two years later as the administrative and monastic centre in the valley and the Tshechu instituted as an annual event.

People of Paro valley and of the neighbouring districts in their customary best attend the festival, which is a social occasion as much as it is a religious event. The five-day festival is like an open – air theatre where important Buddhist teachings are conveyed through dance and drama. It even has a judgment day scene in the presence of the lord of death, dressed in black and
in a terrifying mask.

Getting a seat on the two airlines that fly into the country and hotel accommodation becomes a major challenge because of the rush to attend the festival.