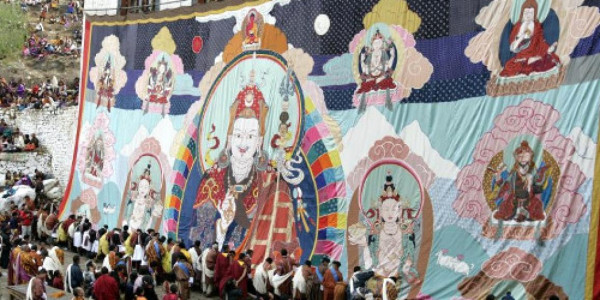 Tshechus or festivals of Bhutan are one of the mainly festive, enjoyable and colorful occasions for both the Bhutanese & the visiting traveler. Tshechu exactly means ‘day ten’ & most of the Tshechu commences on the favorable 10th day of the month of the Bhutanese Lunar calendar. Tshechus are celebrated with much celebration and merriment throughout the nation.

It is held each spring (April 11-15 in 2014) in Paro Dzongkhang (district). Paro is the city where the global airport is situated. The highlight of this celebration is the display of the Guru Throngdel, a very large thangkha (spiritual painting).

The Thimphu Tshechu is one of the most famous festivals in Bhutan as lots of citizen’s gather to the capital in their most excellent garments. This three-day event is a welcomed reprieve from work. Throughout the festival, people pack into the patio of the Tashichho dzong (fortress), a dancing step is erected, and mask dances, frequently with a religious importance, are performed.

Conventional and mask dances carry out to honor Guru Rimpoche and to celebrate the establishment of the Jambay Lhakhang Monastery. The fire ceremonial, Mewang, is considered the highlight. Throughout the fire ceremony, locals sprint under a large flaming gate made from dry grasses.

The further notable event is the Tercham (Dance of Treasure), where masked dancers do naked in the middle of the night. They believe this dance will bless childless women so that they might bear children.

The area of Wangdue Phodrang, central Bhutan, is well-known for its ornamental speeches & songs known as Lozeys. The yearly festival was introduced after the achievement of the Dzong, which is a fortress, in 1639. It is one such Bhutan carnival, where locals and thousands of travelers come together to revel in the festivities & to celebrate life and happiness.

The ‘Dance of Ox’ is also a main attraction, where people dance to make sure a peaceful afterlife. The festival is concluded with the unfurling of a gigantic scroll of different paintings, recognized as Guru Tshengye Thongdrol.

Out of the entire event in Bhutan, Punakha Drubchen is most exclusive. It is about recreation of several consequential scenes & moments from the Tibetan Army battle of the 17th Century. The local services officials recreate & re-enact the outlook dressed in full fight gear complete with swords.

It is to celebrate the win & to pay honor to the villagers who came forward to drive out the Tibetan soldiers out of their nation. It shows thanks to these people because of whom, Tibet was incapable to take over Bhutan.

Apart from Tsechu there are some other celebrations that play a vital role in the lives of locals. Each of these events is, particularly in terms of taste and flavor. The Nimalung Sakteng Festival is some of the other events that grace the celebration calendar of Bhutan.

Bhutan festival expedition promises of totally different experience because of its different cultural trends. The festival tours let foreign visitors to reveal in festivity and acquire a close sight of the life of Bhutanese people.