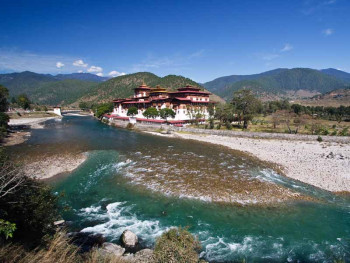 Pungthang Dechen Phodrang – The palace of great happiness is located 4-km north of Khuruthang town in Punakha. The imposing Dzong strategically occupies the land between two rivers, Pho Chhu – Male River and Mo Chhu – Female River. The Dzong appears as a great anchored ship. The walkway from the traditional cantilever bridge over the Mochu River leads to the Dzong.

Punakha Dzong was built in 1637 by Zhabdrung Ngawang Namgyel – the founder of Bhutan. Legend tells that a carpenter named Zow Balep was commissioned to construct the Dzong. He was instructed to sleep in the Dzongchung, before the Buddha’s image. The architect had a vision in a dream about future Dzong. He described the impressive complex he had dreamt of upon waking. This enabled him to conceive the plan for the Dzong. During this period, Zhabdrung Ngawang Namgyel became the first leader of a unified Bhutan. It was named Pungthang Dechen Phodrang Dzong, which means the Palace of Great Bliss.

The Dzong was attacked by the Tibetans supported by five groups of Lamas in 1639. The next attack came in 1644. But the Tibetans lost the battle and commanders had to publicly submit to the Zhabdrung. The captured weapons and armour were placed in the victory temple. The Dzong was ravaged by fire, earthquakes, and floods many times. But it had been rebuilt several times and always to the original specifications. Zhabdrung Ngawang Namgyel later died at the Dzong in 1651.

The first King of Bhutan, Gongsar Ugyen Wangchuck was crowned at Punakha Dzong in 1907. Punakha was the first capital of Bhutan and the Dzong served as the center of government until the reign of the second king, Jigme Wangchuck. It is the second oldest and second-largest Dzong in the country. It is a residence for Central Monastic Body during the winter. All the Kings and Chief Abbot of the Central Monastic Body of Bhutan begin their reigns by offering prayers at this shrine.