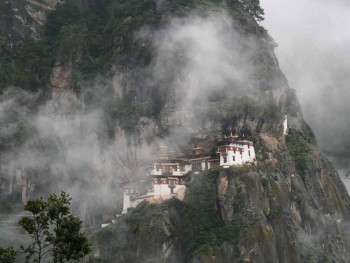 Taktsang Monastery – The Tiger’s Nest is on a rocky cliff about 1,000-m above the upper Paro valley. This impressive scared site is on the right side of the road. Pilgrims from all over Bhutan visit the monastery. And it is one of the most venerated pilgrimage sites in the country.

The monastery was built in 1962. Guru Rinpoche (the precious teacher) or Padmasambhava visited Bhutan a second time in the 8th century. He travelled from Tibet across the high passes through Singye Dzong in Lhuntse (north-east Bhutan).

According to legend, Guru Rinpochhe has flown from Khenpajong in Lhuntse in the form of his tiger-riding emanation – Dorje Drolod. He meditated there for three months to subdue negative spiritual forces, hostile to Buddhism. Later a temple was built on the place where Guru Rinpochhe mediated. In 853, Langchen Pelgyi Senge, one of Guru Rinpochhe’s Tibetan students meditated in the main cave at Taktsang, which later came to be known as Taktsang Pelphug, after his name.

The renovations were undertaken in the 1950s and 1980s. However, the fire destroyed the main chapel at Taktsang in 1998. Following the fire, the government quickly implemented a restoration plan. But it has remained unchanged until today.

The uppermost chapel holds the statue of Guru Rinpochhe in his tiger-riding aspect Dorje Drolod, Vajrakila and the Dedrub Chorten (stupa of faith), among others. The cave of mediation attainment, where Guru Rinpochhe has retreated for months contains a wrathful statue of Dorje Drolod riding the tigress. The original statue is shown only on Drukpa Tse-Zhi (the fourth day of the six months) of the Bhutanese calendar. 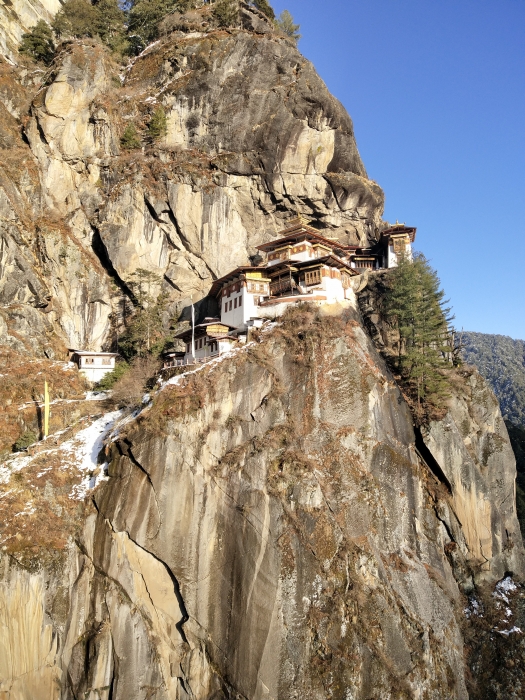